The above character rings a bell to every single person’s mind on earth. It is one of the famous lead characters of Harry Potter series written by J.K Rowling. Emma Watson first came to stardom as Hermione Granger in the harry potter movie series. She has been on spotlight since her entry in Hollywood in different movies namely Harry Potter series, Beauty and the beast from Disney series and many more. She has been on spotlight not only for her appearance in Hollywood but her promoting education for girls across the world.

Emma Watson Quotes are motivational and are followed worldwide among many people. For her good deeds across the world, she was appointed as UN Women Goodwill Ambassador when she visited Bangladesh and Zambia in 2014. She also delivered a powerful speech at the United Nations to launch her U.N women campaign called “HeForShe” where she asked men to fight for gender equality and told them to fight for women because it is their issue too. 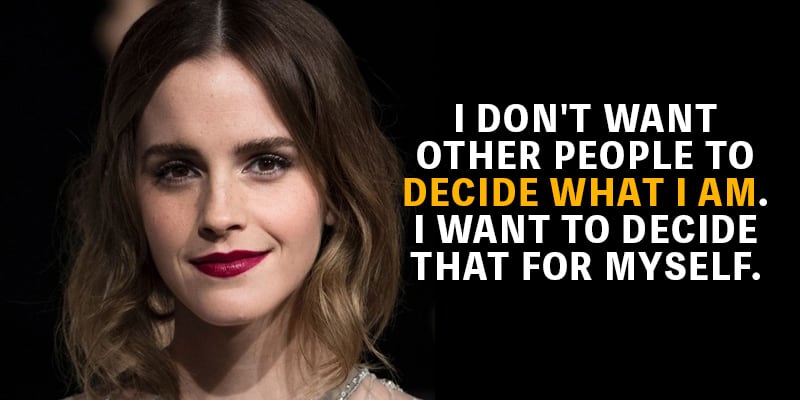 Some interesting facts about Emma Watson

The one who pens down before bed is a profound thinker and speaker. The one who is able to track down her own activities can speak volumes of life. Moreover, Emma is a trained yoga instructor, this adds to her wisdom as Yoga helps you to get things together.

Born in Paris, she knows to speak good French and not great French. She is a bookworm and loves reading books. She maintains a very good rapport with her Harry Potter co-stars and considers them as her brothers.

I don’t want other people to decide who I am. I want to decide that for myself.

When I haven’t been working I’ve tried to travel a lot.

My cinematic crush has been pretty much the same since I was 12: Kevin Costner.

Dan Radcliffe and Rupert Grint to me are like a pair of warm-hearted brothers.

I’m very romantic and of course I want to be in love.

I love fashion. I think it’s so important, because it’s how you show yourself to the world.

If anyone else played Hermione, it would actually kill me.

I don’t want the fear of failure to stop me from doing what I really care about.

I’ve never understood having crushes on people who you don’t know in real life.

I think there’s this idea that lipstick is something quite old or something you’d only wear at night.

Field hockey is my strongest sport, and if I lose a game, I take a long, hot bath and moan about it.

I love painting and have a need to do it.

But sometimes I’ve felt a little constrained by that idea of who I’m meant to be.

Hermione uses all these big long tongue twister words. I don’t know what she’s going on about half the time!

I really love animals and enjoy working with them.

I’ve got about eight pairs of shoes, and that’s it.

I have a real thing for Mexican directors. And I love Guillermo del Toro and Alejandro Gonzalez Inarritu.

As I’ve got older, and since I cut all my hair off, I’ve felt a bit more liberated about trying different things out.

I really want to write a novel. I also want to learn to play the mandolin.

Let’s be honest, I have enough money to never have to work again.

If I hadn’t done ‘Harry Potter,’ I would have gone and done years of art. I really do love it, and I’d love to write.

I do worry about the expectation to look a certain way.

And I always keep cards people send me. I have a whole wall covered with them.

My idea of sexy is that less is more. The less you reveal the more people can wonder.

I could be 100 years old and in my rocker, but I’ll still be very proud that I was part of the ‘Harry Potter’ films.

All I can do is follow my instincts, because I’ll never please everyone.

I have collections of quirky things from places I’ve been to, like a set of Russian dolls.

I like Valentino a lot – they never use actresses in their campaigns.

I’m a perfectionist, so my bossiness definitely comes out.

My friends are all really nice about my fame, they’re just curious really, they ask lots of questions.

Some days, for some reason, I can’t go anywhere, and I’m like, ‘That was a mistake,’ and other days no one will even notice me.

I feel like a voodoo doll. It’s grim. It’s gross.

I was very keen. I was super-eager to please and be good. And I was always kind of bossy.

I have to really enjoy the good things because it makes the bad things OK.

I don’t know, I’d love to try some theater. That’s my other thing. I’d love to do some Shakespeare.

Being an actress, I find myself people-watching and I can be quite shy.

I want to be normal. I really want anonymity.

I don’t consider myself to be a celebrity. I don’t fit that mould.

As an actress I take roles I find interesting.

Emma Watson Quotes are immensely motivational and helps us to do what is right. She being an actress and model could have stayed under the spotlight, but she decides to come forward and work for common people to make this world a better place to live.